In January we spoke broadly about the benefits that buses face with the implementation of congestion pricing. Sam Schwartz was invited to speak at February’s New York City Transit Rider’s Council meeting about the current Fix NYC panel, the most recent congestion pricing plan put forward on behalf of Governor Cuomo. Sam Schwartz created the Move New York plan and continues to have big ideas to help some of the most crowded City streets.

New York City’s transit system is in crisis. Congestion on the City’s streets is reaching all-time highs and bus ridership is on a steady decline in Manhattan’s Central Business District (CBD). Travel speeds have slowed dramatically and more commuters are opting for For-Hire Vehicles (FHV). Charles Komanhoff, a strong advocate for congestion pricing and creator of the Balanced Transportation analyzer, attributes a 4.3% decrease in vehicle speeds in the CBD as a direct result from greater numbers of FHV trips. In the Move New York congestion pricing plan, the relationship between falling bus ridership and greater FHV trips is identified as a vicious cycle, and one which critically needs to be addressed.

The Fix NYC Panel makes nine recommendations with 3 phases to implement congestion pricing in New York City. Clearly, buses will experience substantive improvements from the plan including improved bus speeds, more frequent bus service, and will likely bring riders back to buses and away from the FHVs.

The new service trip surcharge for taxis, black cars, deliveries, and app-based FHVs will help the MTA budget, estimating upwards of $500 million in gross revenues for transportation projects. The surcharge has great potential to decrease congestion attributed to the growing FHV usage. Taxi’s and FHV account for over half of total vehicles in the CBD between 4 and 6 p.m.  The congestion decline will increase bus speeds and encourage customers to move from private vehicles to the more efficient buses.

Once the infrastructure is in place, CBD zone charging pro­gram will be initiated with an assessment on trucks entering the zone during certain peak hours. A brief period of truck-only charging permits potential operational issues to be identi­fied and corrected.

Once infrastructure is oper­ating properly, zone pricing for all vehicles will be implemented. With consideration of variable and dynamic pricing options to maximize congestion reduction.

With the goal of reducing overall vehicles entering the CBD during peak hours, the cordon zone would charge personal vehicles and large trucks premiums for entering and passing through. The subsequent congestion reduction will further improve bus speeds in the city’s most congested areas, while providing a steady revenue stream to the MTA to improve maintenance and operations on the overall transit system. 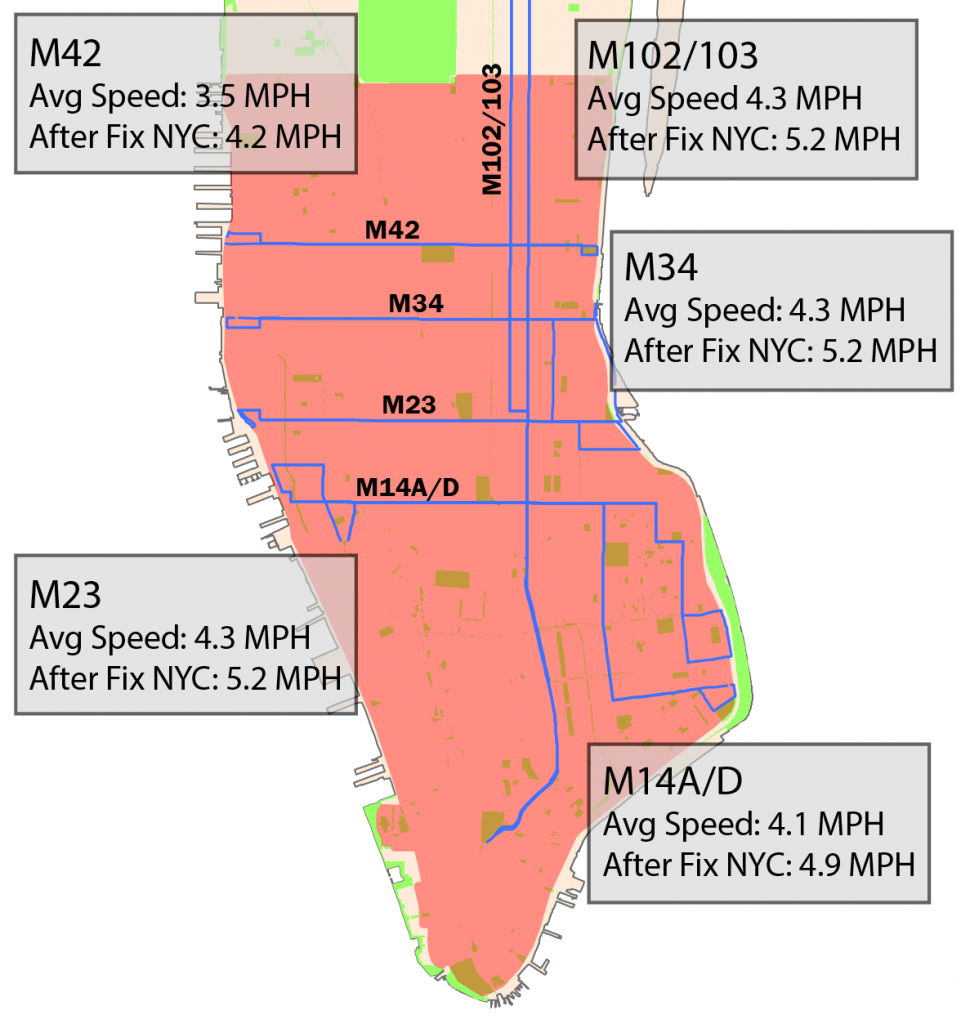 Buses stand to gain a lot if congestion pricing is implemented in New York City.

Better enforcement of traffic violations, reduced congestion from both FHV and personal vehicles, and better funding will all contribute to a better environment in which buses can operate. Bus ridership, service, and speed have been on a steady decline and it is time for action to be taken in order to address these issues. With vehicle speeds poised to increase between 12% and 20% if all recommendations are adopted, Fix NYC has the ability to drastically help our failing buses, giving New Yorkers the bus service a world-class city deserves.